Mogau Sesheone’s dream of preserving South African Cuisine and its proud heritage has been documented on her best-selling cook book, The Lazy Makoti and has always loved experimenting with different types of mouth-watering recipes. Now on its 6th reprint, “The Lazy Makoti” has assisted many foodies on how to whip up the perfect meal and create magic in the kitchen.

Not only does Mogau whip up succulent dishes, but she also hosts cooking classes for young modern Afropolitans and other clients who have a passion for cooking. Contrary to its title, the book is not targeted at what society labels as lazy brides who can’t cook but to anyone who wants to play around in the kitchen. As we enter the festive season, the book can also be a great Christmas gift and a great accessory for families to explore different types of recipes .

Before we go any further, do tell us about Mogau?

“I am a chef, entrepreneur and author passionate about South African heritage and food. I became a chef after leaving corporate to start ‘The Lazy Makoti’. I studied cheffing and did my apprenticeship at The Saxon in Johannesburg. I made the Mail and Guardian top 200 young SA in 2015 and The Forbes 30 under 30 list in 2016. That same year I took part in the Mandela Washington Fellowship at the University of Wisconsin to study Business and Entrepreneurship “.

Take us back to the first moment when you realized you have an immense passion for cooking?

“I have always loved cooking but it was only after a friend who was due to get married that I suggested that I give them cooking lessons. Word then got around and that became what I did in my spare time. I then decided to leave my corporate job to go to culinary school.

READ ALSO  Being the ‘Hostess with the Mostess’ together with OLX

That’s how the name ‘The Lazy Makoti’ came about. The friend I first gave cooking lessons to would lament about how she was nervous that her in-laws would call her that simply because she couldn’t cook. I thought it was funny and witty. It’s a truly South African name that resonates with everyone, I see it on the faces of many when they first hear it.”

When you are not creating mouth-watering dishes, what do you do?

“Travelling, spending time with friends and family, reading”, she says.

It’s quite an interesting title for a book, what is the reasoning behind it?

“The lazy Makoti is the name of my business, wherein I host cooking classes, the book is a continuation of that journey.”, she explains.

We normally label a woman who can’t cook, wash or clean the “lazy makoti’, is this book trying to address that by giving tips?

“The book features easy to follow recipes in a simple language with ingredients that are easily recognizable by any South African, they are probably already in your kitchen or pantry”, says Mogau.

How has the reception been since you have released the book?

“It exceeded every expectation. Literally breaking every record when it comes to cookbooks. The book has been the best-selling cookbook since it came out last October. The book was nominated for the International Gourmand World Cookbook awards in 2 categories: Best 1st cookbook and Best Photography and we placed silver for Best Cookbook”.

What thought process do you go through when creating or coming up with recipes, especially the ones that are featured in your book?

“Some of the recipes were tried and tested recipes that have been in my family for generations, some are my take on the classics, and some are inspired by ingredients or seasons or moods, chefs are constantly creating”, she states.

We are in the festive season and a lot of families with be gathering for feasting and dining. What tips can you give to the people who will preparing mighty feasts for their families?

“Plan ahead – think about what you want on the table and do your shopping days before.

Get everyone involved- there is no reason why you can’t split the work and have someone on the protein, another on salads, another on dessert and another on starch, then others on cleaning up and dishes. It’s unfair to appear at lunch without having helped while the person cooking doesn’t get to experience the essence of the festive season, always stuck in the kitchen

Switch up old traditions – you can make the same Christmas classics with a twist e.g add orange zest to Dikuku gives them a nice new flavor, adding lemon grass to Gemer elevates it and instead of the same custard and jelly trifle, make a red wine poached pear version “, she firmly says.

Can we anticipate another ‘Lazy Makoti” part two in the near future?

“Definitely! A TV show first then probably another book”.

What has been the best lesson you have learned ever since you embarked on this journey?

To trust my gut! The process to publishing that book taught me that most of the publishers I met with weren’t convinced that a book featuring “Black African food” would sell but I’m so glad that I insisted that it would, and boy did it sell! 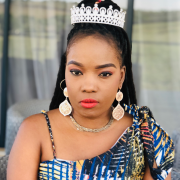 Keep your cool this Summer with dw eleven - 13

A Gift Box For Every Palate By Roku Gin